Penguins.  When I recognize I have just spotted two things that make a connection I try to go with the flow the best I can.  In this case penguins make the connection.  A couple of days ago I saw a photo on Facebook of a newly hatched King penguin at the Cincinnati Zoo.  It didn’t look like a penguin to me, but I have never seen one that young, so what do I know.

Then, a friend posted a photo of herself and a couple of friends in a pool, so I copied it and I cropped it.

I thought I saw the image of a penguin in the bottom of the pool, and when I asked her, I was told it was a turtle tile. Well, you know what? That baby penguin in the zoo photo does kind of resemble a turtle. I guess it is the thought that counts in my synchronicities.

Anyway…I stopped at the Salvation Army on my way home from taking photos in one block or two on Main Street.  I stopped at the because I was feeling a connection to a church member who likes to shop there, and recently had cancer surgery. I was thinking she probably missed her weekly shopping and I knew I had not been there in months myself. I only had a few dollars in my pocket so I wasn’t really planning on doing any shopping, per se. 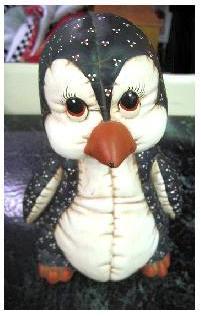 At the bottom of the stairs I noticed a stuffed animal sitting on an antique stove.  It was a penguin. Having posted on Facebook this morning a photo of a frozen Niagara Falls, I thought well, the hot and cold thing was picked up. Because I had made the connection to a penguin already I figured there was some reason to remain aware.

No idea why I was in the store but I got a basket and pushed it down the first aisle. In the magazine/book section I saw the husband of the woman about whom I had been thinking earlier. I did not say hello to him, and as a matter of fact, made sure he did not see me. Then I held the camera around the book stack and took his photo.  As I passed by him I 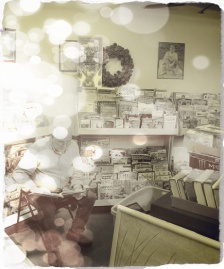 noticed he read with his lips moving…a sign to me. I saw that on the wall was a poster of a mother and son with a loaf of bread. On the shelf near the seated man was a copy of Our Daily Bread. Another connection visually, told me I was on the right track.

Sneaking past him, I hurried to the aisle on the far wall, around the back of the 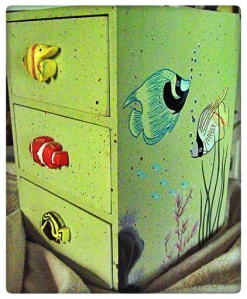 store and then into a back room. I picked one of two small painted sets of drawers to purchase. I saw there was no price on either one. Upon leaving the room I saw the woman, about whom I had been thinking, in the aisle, looking at linens. I looked at the cart I had placed nearby, put the set of drawers in it and noticed a pair of shelf brackets had been placed in it. I  left the basket there and spoke to the woman about how wonderful it was to see her out after surgery a week ago. I showed her the photo I had taken of her husband who had not noticed my presence.

We chatted about a couple of things and she asked a favor of me, to get information regarding a pill my  neighbor was taking for her cancer…turmeric. When I told her what it was she could not pronounce it and I said I could write it down for her if she had a pen. I fumbled in my purse (I rarely carry one) looking for a pen  and found one, telling her that she now needed to supply me with something to write on.

Sometimes, I try to control my thoughts and feelings about my syncs because I am unsure how others might take it.  So when she handed me the little notepad,

I wrote “tumeric” on the penguin’s belly. I am aware I misspelled it when I did.  I had to wonder if that meant “tumor I see”. I suppose that was more for me to understand than her, as she didn’t know what turmeric was and had just had surgery to remove her cancerous tumor.   What mattered, I think, was that I showed her the pen with which I had written on her notepad.  She acknowledged it.

She has been on my mind a lot. When she first told me about her cancer I told her that for whatever reason, and it is not because I don’t care, it is because I had no worry about it, that I was not concerned about the cancer because the Spirit had given me a certain peace about it, as though she would be fine. Here  she was out shopping after major surgery a week ago; that was clarification if I ever saw any! 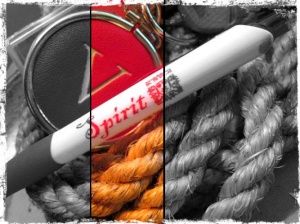 I headed for the check out counter where I placed the pair of plastic shelf supports. I was aware that someone nearby was humming a Christmas song but could not quite get the tune. I had a discussion with the clerk,  handed her the pair of plastic shelf supports telling her someone had placed them in the basket and they were not something I needed. She took care of another customer while I looked over  items on the counter. I saw something with which I made a connection, no price on it but I knew it was something that made the connection complete for me.  It was a postcard.

Another one, I thought… the second postcard in a week.  I don’t think I had bought a postcard in the ten years before this week! Just one more sync.

I realized I was also purchasing two things with no price tag on them. That rarely happens. I took a photo of the postcard I bought today.

There are symbols everywhere.

Everything has a deeper meaning.

The postcard came with a real sand dollar.